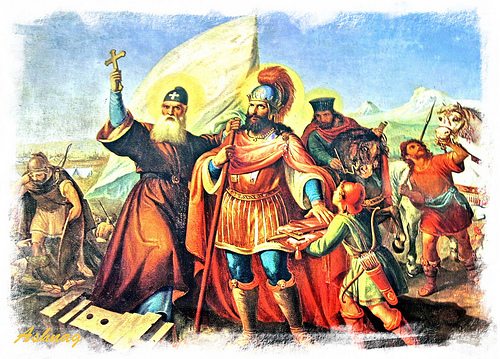 Today, Armenians around the world celebrate the Feast of Vartan, commemorating the war between pagan Persia and Christian Armenia in 451.

On the battlefield in 451, Vartan Mamigonian, the leader of the Armenian forces, addressed his soldiers: “He who supposes that we put on Christianity like a garment, now realizes that as he cannot change the color of his skin, so he will perhaps never be able to accomplish his designs. For the foundations of our faith are set on the unshakeable rock, not on earth but above in heaven, yet by faith we are established in heaven where no one can reach the building of Christ not made by human hands.”

Today is the day to remember and recognize the commitment Armenians have to their Christian faith. With the “Battle of Avarayr” Armenians clearly demonstrated that Christianity had become a part of their national identity.

“Newly wondrous crown-bearer and leader of the grave, you courageously armed yourself against death with the weapon of the Spirit, O Vartan, courageous warrior, you turned the enemy to flight and have crowned the Church with your rose-colored blood. …

Surrounded today by the host of these crowned warriors, we sing glory in praise to you, O Holy Trinity, and we thank you for the mercy shown by you to the Armenian churches brightly adorned by the martyrdom of these strugglers.”

(Sharagan to Saint Vartan and his companions,
from the Liturgical Canons of the Armenian Church)