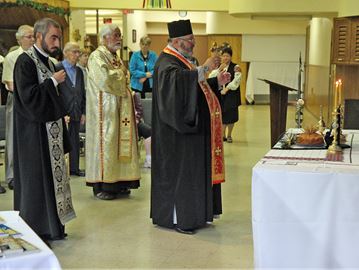 On Friday, August 22, 2014, Very Reverend Father Vartan Tashjian, represented His Grace Bishop Meghrig Parikian, Prelate of Canada, at the 100-plaques unveiling ceremony in Brantford, Ontario, to mark the 100th anniversary of the federal War Measures Act.
To commemorate the historic anniversary, and to recognize the many families that were affected by the internment operations, the Ukrainian Canadian Civil Liberties Foundation launched Project CTO. (Cto means “one hundred” in Ukrainian.) The project received financial support from the UCCLF and the Endowment Council of the Canadian First World War Internment Recognition Fund. 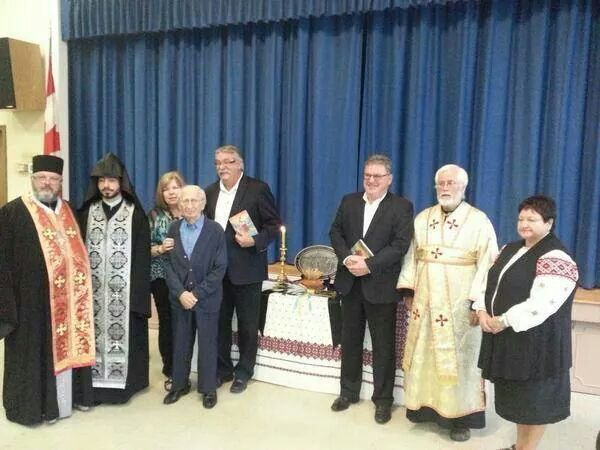 On Friday, 100 plaques were unveiled across Canada, moving from east to west, from coast to coast and creating a “wave” of recognition.  On behalf of the Prelate, Father Tashjian extended prayers to the organizers and congratulated author Marsha Skrypuch on the release of her book, Dance of the Banished, about a young Brantford man who was interned in a prison camp 100 years ago.

Father Tashjian said “Today, with this event, we unveil a history of 100 years old, but one with new beginnings and promises. We thank the government of Canada for the opportunities of a better life and prospects it offers each and everyone in this country.”

He continued his speech by emphasizing, that there are nations, who are still waiting for justice and recognition. Next year, we will commemorate the 100th anniversary of the Armenian Genocide and the lives of more than one and a half million, who were massacred by the Ottoman Turks. He quoted His Holiness Aram I, Catholicos, who states: hundred or thousand year old anniversaries do not constrain us from our demands. The Catholicosate of Cilicia – as one of the victims of the Genocide and Armenians in the Diaspora being the descendants of the direct victims of the Genocide – our Catholicosate remains as one of the strongest voices to claim our people’s rights.”

In closing, Father Tashjian prayed:
Lord, you granted us the great gift of freedom.
In these times, O Lord, grant that we may be free from any form of racism or intolerance. Remind us, Lord, that we are all equal in Your Loving eyes. May God bless you All… Amen!