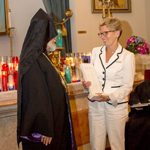 Premier Kathleen Wynne, Ontario’s 25th and first female Premierarrived at St. Mary Armenian Apostolic Church of Toronto on the evening of August 16, 2013, where she was greeted by His Eminence Archbishop Khajag Hagopian, Prelate, and Archimandrite Meghrig Parikian as well as members of the Church and community leadership.

Premier Wynne was presented with flowers as well as a serving of bread and salt, which is a symbol of breaking bread and blessing and one of the highest friendly gestures the church observes.

The Premier was escorted into the church with Prelate Hagopian and Very Reverend Father Parikian, where she took her seat with Prelate Hagopian for a short blessing and the presentation of a gift; a khatchkar, by His Eminence Archbishop Hagopian. Premier Wynne brought her greetings acknowledging the church’s 30th Anniversary as well as the Assumption of the Virgin Mary.

Afterwards, a private meeting took place between the Premier, Archbishop Khajag Hagopian, Prelate, Archimandrite Meghrig Parikian, Minister Michael Coteau and members of the church board of trustees and community leaders.

Premier Wynne moved outside into the courtyard where she delivered her remarks to members of the community.