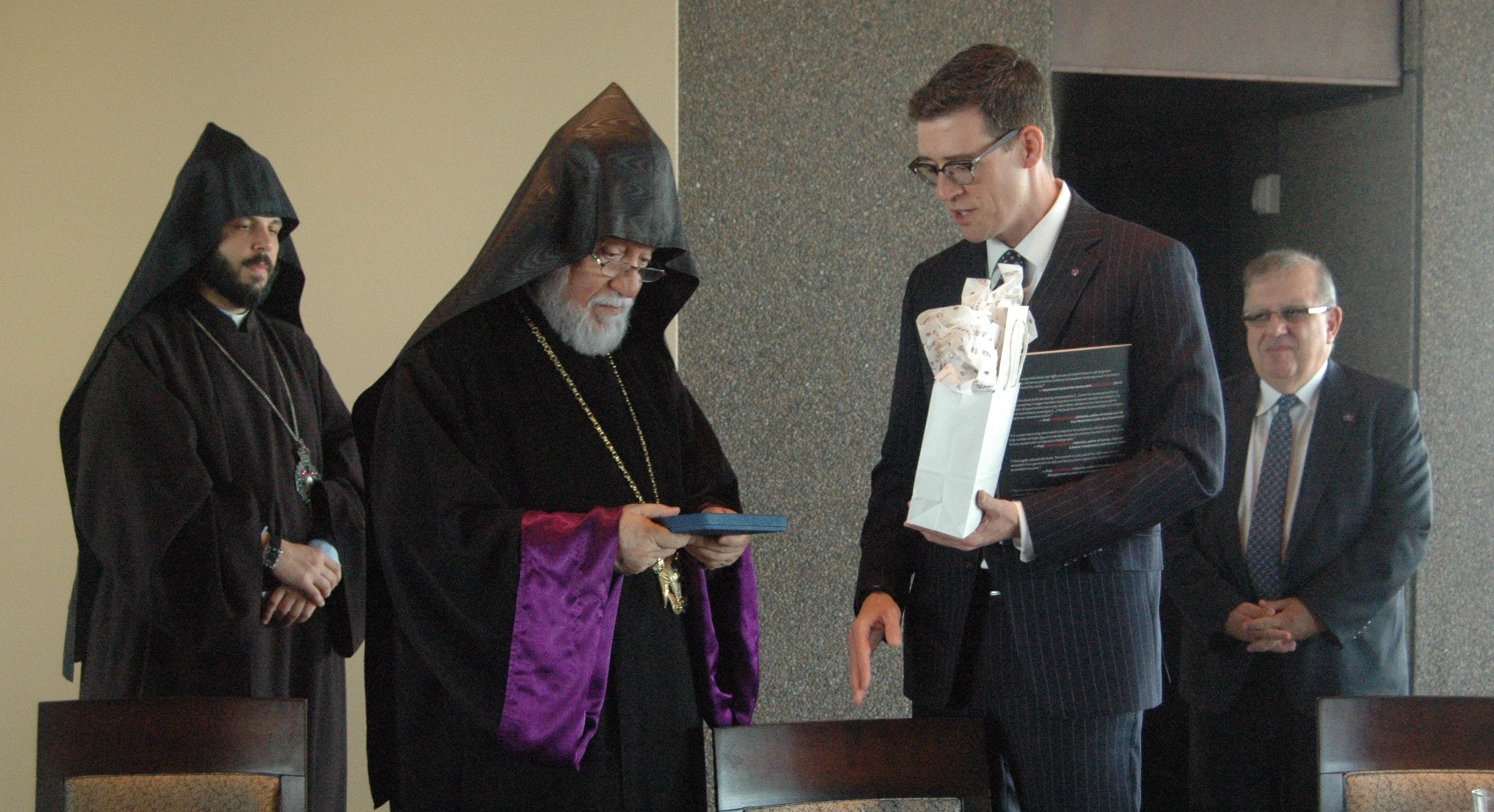 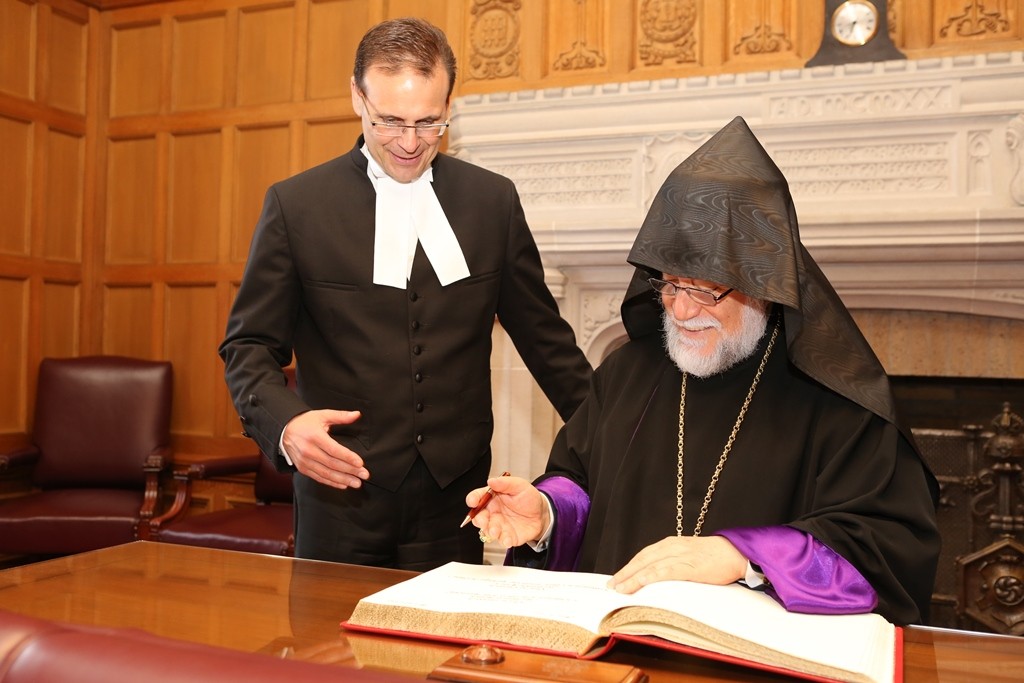 Ottawa, Ontario_ His Holiness Aram I, Catholicos of Armenian Church of the Catholicosate of Cilicia, visited the Honourable Mr. Leo Housakos, Speaker of the Senate of Canada on June 4, 2015.

The Pontiff congratulated the Honourable Mr. Housakos on his appointment by the Governor General on behalf of the Monarch as the Speaker of the Senate, who assumed the position on an interim basis on April 24, 2015, and was subsequently permanently named to the job on May 4, 2015.

The Honourable Housakos and His Holiness exchanged their concerns and Mr. Housakos spoke about the tenacity of the Armenian community, as well as multiculturalism and the integration of the people in Canada.

The Pontiff brought up His concerns about the Middle East crisis and how it is a global risk and requested that a strategy be developed and systematically implemented.

His Holiness Aram I also stated that “Genocide is Genocide, it is part of history, no matter what political leaders say.”

In turn, Mr. Housakos asked about the challenges the Church faces today. His Holiness described in the detail the new challenges they are facing and how the church needs to emerge into these realities. “The church should be interacting with its people, we have socio-ethical issues and we should not be dogmatic but pastoral, remaining faithful to the core values, but keep traditions with relevance. This is how we will bring the gap closer between the youth and the church. We have to try to understand their concerns and realize that this is not theological issue but a realistic fact and therefore a dialogue should be constant and continued.”

During this meeting, His Holiness and Dr. Bennett discussed how Freedom of Religion is fundamental. Dr. Bennett noted how they are focusing on the Middle East and watching with deep concern what the Armenians and Christians are facing today in Syria and looking to raising awareness rather than taking a robust approach, emphasizing that tolerance and diversity are key.

In turn, His Holiness said that “we need to engage in in-depth conversations about the issues in the Middle East and it needs to be predominant in global issues. They should be addressed in a broader perspective and a comprehensive approach. The political regimes and the religious freedoms are volatile and we need a contextual approach.”

His Holiness Aram I also expressed to the Ambassador his wish for the House of Commons of Canada to adopt a resolution anchored on a declaration by its Religious Freedom Ambassador, urging Turkey to end all forms of religious discrimination and to return places of worship, monasteries, schools, hospitals, monuments, relics, holy sites, and other religious properties within Turkey to its rightful owners. His Holiness informed the Ambassador about the lawsuit the Catholiocsate of Cilicia has filed in the Turkish Constitutional Court, requesting the return of the historical Catholicosate of Sis, which was forcefully taken by the Ottoman Turkish Empire, as were all Armenian churches and institutions.

His Holiness was accompanied by Bishop Meghrig Parikian, Prelate of the Armenian Prelacy of Canada, Most Reverend Father Housig Mardirossian, Ecumenic Relations Officer of the Catholicosate, Krikor Der Ghazarian, Chairperson of the Executive Council of the Armenian Prelacy of Canada and Dr. Girair Basmadjian, a member of the Central Executive Council of Catholicosate.

About the Catholicosate of Cilicia:

In Cilicia, the Catholicosate became the centre of Armenian life around which the religious, national, cultural, and educational activities were organized. After the Armenian Genocide of 1915, the Catholicosate contributed significantly to the formation and organization of the Armenian Diaspora. During World War I (1915-1918), one and a half million Armenians were massacred by the Ottoman-Turkish government. In 1921, when the French forces evacuated Cilicia, a second wave of massacres ordered by Kemalist Turkey took the lives of another three hundred thousand Armenians. The rest of the Armenians were forced to leave their centuries-old homeland and found refuge mostly in Syria and Lebanon. The Catholicosate in Sis, as well thousands of Armenian churches, monasteries, schools and cultural centres were robbed and ruined by the Turks. Catholicos Sahak II followed His flock in exile. After wandering in Cyprus, Syria and Lebanon, in 1930, He established the Catholicosate in Antelias, Lebanon. 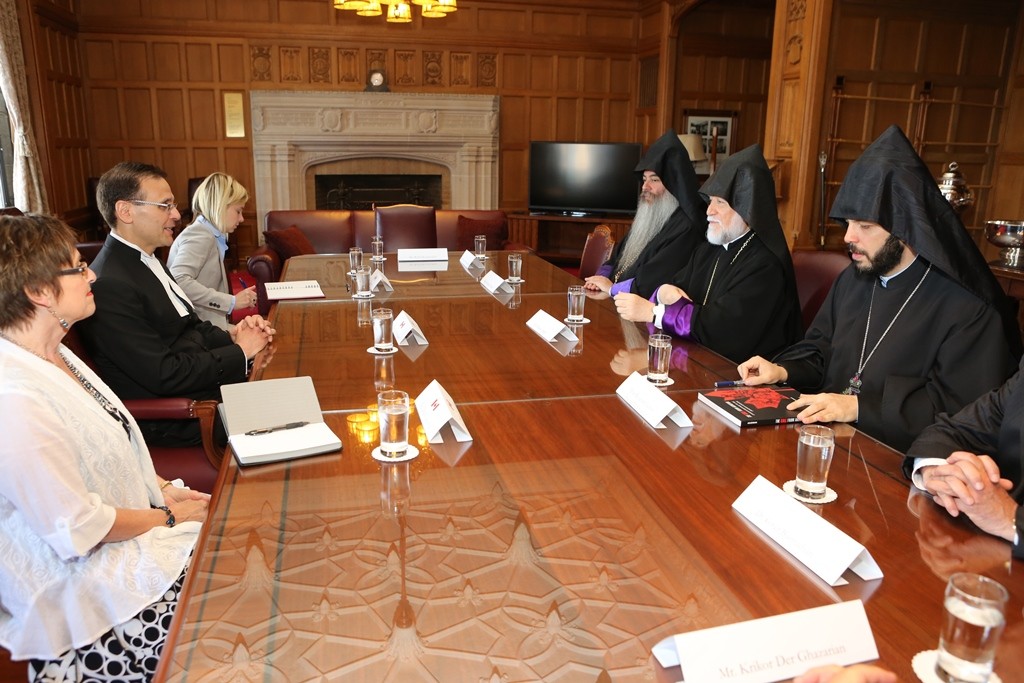 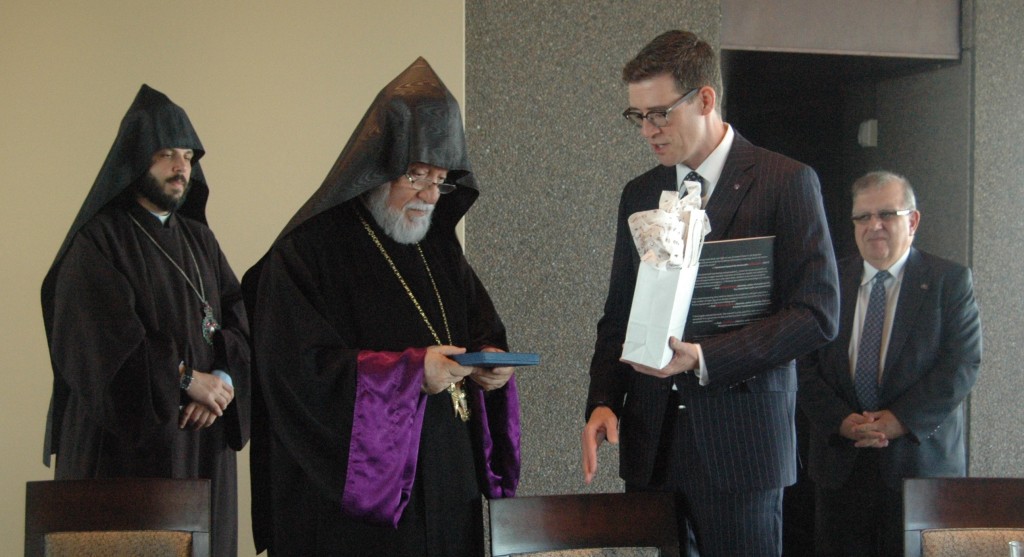